Joe Abercrombie (aka @LordGrimdark on Twitter) is best known for his bestselling fantasy series, The First Law trilogy.

The success of his novels has shown that Abercrombie is certainly a name to remember, but his new Shattered Sea trilogy is a brave step into the YA market.

On reading the blurb to Half A King, the first book in the series, I was instantly enthralled. On top of that, the number of positive reviews from renowned authors such as the great George R. R. Martin made me buy the hardback copy straight away. As an added bonus and an extra selling point, it was also signed.

Now, on reading Half A King, my first thought was “this is not what I expected.” I couldn’t put my finger on why. Then it hit me, it was YA fiction and, as I don’t read a lot of YA, I honestly had not expected it to be.

So, what exactly makes it YA?

“Thorn pushed through a grumbling throng flooding into a temple for prayers. So many temples here, and so much crowding into them to pray.” page 263, Half The World.

While this is a fine way of introducing a scene, I can’t help but point out that, if this weren’t a YA novel, the above two sentences could have turned into a beautiful, detailed description of the hustle and the architecture. This is one of the main factors that makes this series YA and not Adult Sci-Fi Fantasy.

The romantic undertones of the books are also another way in which we can tell that it is a YA series. While you root for the characters and want them to be happy, I often felt let down at how obvious their feelings were. The way that their emotions are portrayed gives it a very high school feel, for example:

“He stood there, silent. Waiting. Looking. No bloody help at all. Just say it. How hard could it be? She’d killed men. Just say it.” page 366, Half The World.

The characters wear their hearts on their sleeves to the reader, which is both endearing one minute and frustrating the next. Throughout the series you want to be surprised by how the love stories turn out, but I’m afraid to say that I wasn’t surprised once.

“They kept coming, battle cries a faint burble over the ringing in Raith’s ears. They kept coming, as men above stabbed with spears, flung rocks down, leant out to hack with axes. They kept coming, some kneeling with shields above their heads as steps while others clawed their way up the timbers of the makeshift wall.” page 352, Half A War.

You can definitely see what Abercrombie is trying to do here, but sadly it happens a bit too often for it to have any positive effect.

I realise that so far I’ve been quite negative about this trilogy, but the truth is that I loved it. The characters really are endearing, and the plot lines are wonderful and truly compelling, I just felt let down with the writing itself. Abercrombie created such a diverse and gripping fantasy world, similar to that of A Game of Thrones, and all I wish is that Abercrombie’s writing could have done his imagination justice, as it had the potential to be a truly epic series, on a par with A Game of Thrones itself. If only the writing had been as detailed and as complex.

What is the series similar to? 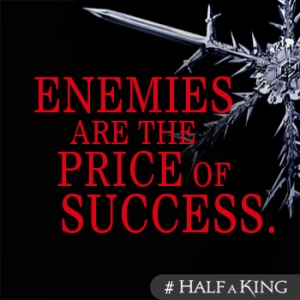 We watch as she joins a crew and sails halfway around the world alongside Brand, a fellow trainee who lost his place as a warrior when he stood up for Thorn, trying to save her life. We watch as she trains to fight under the guidance of the mysterious witch Skifr, and as she defends the Empress Vialine, ruler of Skekenhouse, the most powerful city known, against five attackers at once. We watch as she becomes the Chosen Shield of Queen Laithlin, husband to the King of Gettland and Yarvi’s mother. We also watch as she comes face to face with Grom-gil-Gorm, a warrior who has been told that no man can kill him.

Thorn is passionate and feisty but she also has a lot of heart, which is shown through her feelings for Brand. The Thorn-Brand relationship is at times frustrating due to the lack of imaginative writing on Abercrombie’s part. For example, these inner dialogues with herself can be particularly trying:

It is this type of writing that makes the series distinctively YA. I understand why Abercrombie wrote scenes this way, as it does help to show a younger, more vulnerable side to Thorn and helps you to understand her insecurities. However, it gets a bit too teen angsty at times.

I also adored reading his perspective when it came to his relationship with Thorn. While Thorn is nervous and naive in the way she thought about herself and Brand, he is simply very endearing. He is more down to earth in his thoughts and more open to the reader about how he feels. He loves and admires Thorn and his inner dialogue openly admits this throughout, whereas Thorn’s inner dialogue seemed to often not trust itself.

Keep in mind that these are just the main characters and that there is a large and dynamic cast of others as well.

While at times the series felt a little too similar to A Game of Thrones for my liking, there was one main aspect in which it truly stood out, and that was the creation of elf magic. Throughout the series we learn that many thousands of years previous to the time in which it is set, elves walked the earth. The elves were extremely advanced, physically, socially and culturally. They used magic to create the strongest machinery, to create the most beautiful buildings that could withstand any type of attack and to forge magical weapons that could destroy any enemy. The legend in the series goes that there came a time when the elves waged war on the one true god, using their advanced and magical weaponry. In this war they broke the god, forming the Tall Gods which the likes of Yarvi and Thorn come to worship. However in the breaking of god, they also broke themselves, as they were wiped out entirely in this one act of defiance.

This concept of one god being split into many is another way in which the Shattered Sea books hold similarities with A Game of Thrones, as is the description of the elf ruins at Strokom, which certainly brought Valyria from A Game of Thrones to mind.

However, Abercrombie has done something quite ingenious with his elves of legend.

You see, when a company including Father Yarvi and Koll set out to the ruins of Stokrom in Half A War, they intend to uncover the elf weapons that had been there since the breaking of god. Elf weapons, they are told, that are magic and can kill any living being within seconds. Some people think that the use of elf magic is too dangerous, and warn the crew that the elves died for their advancement, as they got too far ahead of themselves and suffered the consequences. The crew are told to heed the fact that history often repeats itself and that having an advanced knowledge of weaponry, before people have had the chance to come to terms with it and the questions of morality surrounding it, could be fatal.

When they arrive at the ruined city and begin their search, Koll is in awe of what he sees and, as Abercrombie describes it to the reader, some interesting notes begin to strike a chord. Abercrombie first mentions extremely tall buildings made almost entirely from glass, which put me in mind of the modern-day skyscraper. Little things here and there reminded me of modern sliding doors and courtyards, and then he mentions paper. Paper is strewn across the floor, still there from when the elves vanished, still showing the elf writing on them. Paper rests on and inside a table, much like a modern-day desk. That is when it starts to creep up on you, the elves were modern human beings as we, the reader, know them. It hits home when they find the elf weapons which are described as long and thin, with a segment on one end as if to hold it out by your hand in front of you, with a small rotating drum and a barrel which fire shoots out of. They are guns. The elf relics are modern guns.

This realisation blew me away, and I hadn’t seen it coming for a single minute. It changed the way in which I viewed Abercrombie’s world entirely and made the argument that history repeats itself really strike home. Is this what Abercrombie wanted us to think about? Is this perhaps a warning that modern-day humans are becoming too advanced too quickly, before having the awareness and understanding to use our knowledge safely? Is it a critique on the way in which weaponry has advanced over the previous years?

You could view it in any or all of these ways, but I found this subtly commentary on human nature extremely moving and very profound.

I know that I’ve been a little harsh on Abercrombie’s writing style, but at times he came out with some wonderfully touching and profound words of wisdom.

As an ending note, one of my favourite quotes is from Skifr in Half a War:

“Rejoice in what you have. Power, wealth, fame, they are ghosts! They are like the breeze, impossible to hold. There is no grand destination. Every path ends at the Last Door. Revel in the sparks one person strikes from another…They are the only light in the darkness of time.”  page 416, Half A War.

To conclude, Joe Abercrombie has created a great little YA fantasy series. One which shows his prowess in the YA world, and clearly demonstrates that he could easily become a master of romantic fantasy.

For lovers of reading, writing, books

A Little Blog of Books

Book reviews and other literary-related musings

The Opus of a Jaybird.

An Online Collection of Writing.

One girl's adventures in books, life and travel